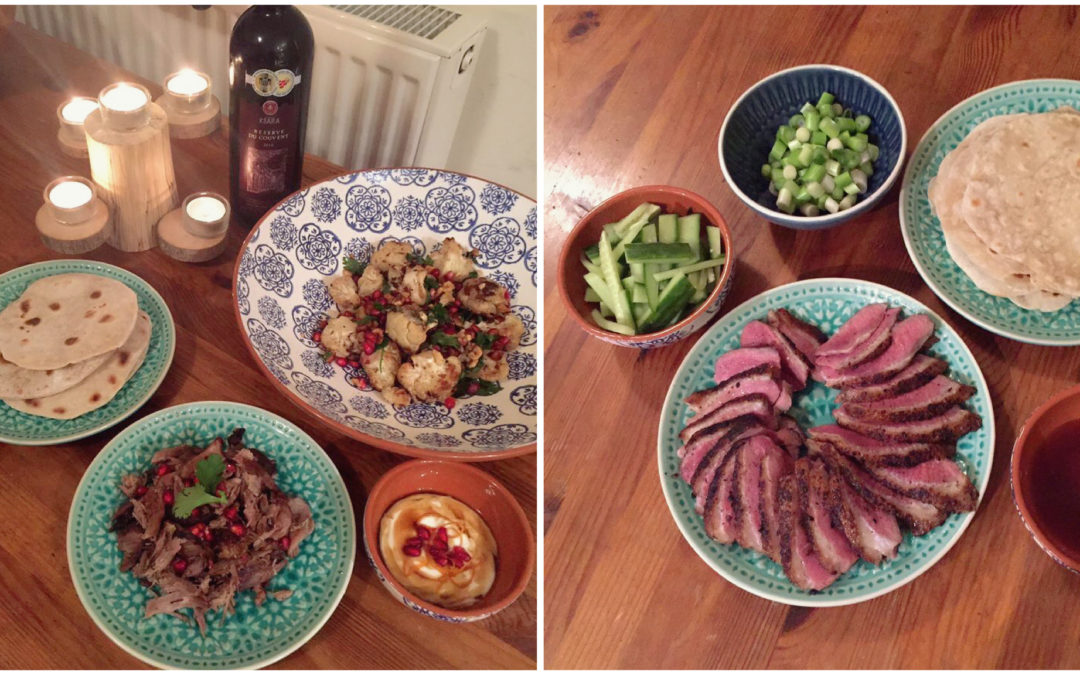 Make your own version of the classic Chinese takeaway dish with a twist, with Molly’s crispy aromatic duck two-ways, including a selection of scrumptious options for sides!

Things I have learnt in the past week:

If you’re making shredded duck do not, I repeat do not, believe any recipe which tells you there’s a quick and easy way to make it with duck breast. You will end up just making pan-fried duck. It will taste amazing, but will cause you a mild meltdown about how to make it look nice for Instagram. Use legs.

Chinese 5 Spice smells amazing and it has made me want to experiment much more with Asian-style food, which has never really been my bag as I am allergic to chili. But this has no heat, just yumminess!

As much as the above is true, I just love Middle Eastern food too much. So, after my first attempt at this dish went wrong, things took on a slightly different vibe.

What to serve with the duck?

If you’re going for the traditional Chinese takeaway-style version, then you can’t go wrong with some savoury pancakes, plum or hoisin sauce and some thinly sliced cucumber and spring onions! I must admit to trying to make my own pancakes and they went horribly wrong and ended up more like poppadoms so I reckon buy your own. Sometimes life is too short.

If you’re going Middle Eastern, then you might want to put it together with some flat breads, salad, and a bit of yogurt. I added some pomegranate molasses and a fresh squeeze of orange juice to my yoghurt but only because I had them in and was feeling fancy. My absolute favourite salad in the world at the moment is the below one from Yotam Ottolenghi’s “Jerusalem” book. It’s so easy and the cauliflower and hazelnuts can be roasted in advance.

Molly has lived in Dorking for 10 years and been managing Two Many Cooks on South Street for the past year and a half. “I first met Gary and Alex before they officially opened when my mate Jon came in for a coffee and said he’d arranged to meet the boys at Two Many Cooks to discuss working for them. They had their chat, Jon and Reuben’s found their new home and Gary and Alex turned Two Many Cooks Dorking into their office and interview space for the day! I tweeted them, they tweeted me and the rest is internet history. I was a vegetarian from the age of 5 to 23 and still feel I have so much to learn about what I like when it comes to meat and how to cook it, so having Dorking Butchery in town has been absolutely brilliant. My favourite thing is to pop in and say “I have X and Y ingredients in and I want to cook for about Z hours (or minutes!), what should I do?” It has never failed me.”

You have Successfully Subscribed!

You have Successfully Subscribed!